in the occasion of Antonino Maugeri’s 75th birthday 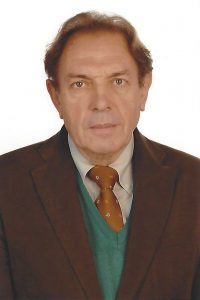 Graduate in Mathematics at the University of Catania. Full Professor of Mathematical Analysis since 1976. From the beginning of his scientific activity, he has been concerned with the existence and regularization theory for linear and nonlinear elliptic and parabolic equations and systems with discontinuous coefficients. Then, keeping the minimal assumptions, he got existence results for the oblique derivative problem, partial and global Hölder continuity for nonlinear systems, both in the variational and nonvariational case, precising the Hausdorff dimension of the singular set. The obtained results are published in several international journals and are partially collected in a monography “Elliptic and Parabolic Equations with Discontinuous Coefficients”, Wiley-VCH, 2000, in collaboration with Dian K. Palagachev and Lubomira G. Softova. Most of the recent results have been presented in international conferences devoted to linear and nonlinear partial differential equations.

He is also concerned with Variational Inequalities and their applications to equilibrium problems. From the very beginning of the theory of Network Equilibrium Problems, expressed in terms of Variational Inequalities, he contributed to the development of the theory, enlarging the field of application of Variational and Quasi-Variational Inequalities to a wide field of equilibrium problems, as traffic networks, spatial price economic markets, financial equilibrium problems, the Walras problem, the oligopolistic market problem, the elastic-plastic torsion problem. Moreover, he and his researcher group has been the first to study the infinite-dimensional duality theory and the minimax theory using separation theorems based on the notion of the tangent cone, without requiring the nonemptyness of the interior of the ordering cone of the sign constraint set. He has established an internationally well-reputed medium of scientific exchange by organizing periodically international workshops and conferences at the Ettore Majorana Center in Erice and he has been co-editor as guest editor of special issues on prestigious journals of related results obtained during such meetings. In particular, in 2008 he was a guest Editor, together with N.S. Trudinger and M.K. Venkatesha Murthy, of a special volume of Journal of Global Optimization in memory of Sergio Campanato (Vol. 40, N. 1-3, 2008) and in 2009 he was co-director, together with Luigi Ambrosio and Luis Caffarelli, of the workshop Variational Analysis and Applications, in memory of E. De Giorgi and G. Stampacchia. He was co-editor together with L. Ambrosio and L. Caffarelli of a special issue published by Discrete and Continuous Dynamical Systems in honour of E. De Giorgi and G. Stampacchia (Vol. 31, N. 4, 2011).

He was a member of the Scientific Committee of CIME (Summer International Mathematical Centre), a member of the Scientific Committee of the Bollettino dell’Unione Matematica Italiana and has been the director of the project Firb 2001 “Equilibrium Problems and Variational Models” and coordinator of the Project PRIN 2008 “Variational Analysis and Partial Differential Equations”. He is associate editor of Journal of Global Optimization and Journal of Optimization Theory and Applications, former member of the Editorial Board of Set-Valued and Variational Analysis: Theory and Applications, member of Editorial Committee of Bollettino dell’Unione Matematica Italiana. He is the co-editor of five volumes and the author of about 100 publications appeared in several international journals and has a strong collaboration with prestigious research groups in USA, France, Germany. He is also a promoter, with Franco Giannessi, of the international Gold Medal “Guido Stampacchia” Award which has been assigned to Tristan Riviere, Giuseppe Mingione, Camillo De Lellis, Ovidiu Savin, Alessio Figalli, Guido De Philippis.

Antonino Maugeri is mentor of more than 20 Italian and foreign researchers.